The A4400 (or Inner Ring Road or Queensway) was a main road in Birmingham that previously formed a ring around the then much smaller city centre. Junctions on the road were largely grade-separated, with pedestrians kept physically separate from vehicular traffic and most junctions allowing vehicles staying on the road to pass over or under those using the junction. It is now widely regarded as one of the classic urban planning blunders of the 20th century.[1][2]

Although seen as a revolutionary improvement when its first section opened in 1960, the “concrete collar”, as it became known, was later viewed by council planners as an impenetrable barrier for the expansion of Birmingham’s city centre. In particular, it became unpopular with pedestrians, who were required to use subways at the roundabouts – which, understandably, created resentment, not least because subways were widely perceived as crime-ridden and unsafe. According to 2011’s Birmingham Big City Plan, the Inner Ring  Road has restricted open spaces, growth and economic activity. It has also made the city centre more crowded and harder to navigate.[3][4]

Since 1988, Birmingham City Council has sought to recreate links between the city centre and the neighbouring areas, enlarging the city centre and improving the pedestrian environment across the city, with a particular emphasis on shifting vehicular movements out to the The Ring Road.[5] Pedestrian crossings are replacing underpasses.[7]

But are there implications in any of this for Coventry and its own inner ring road? 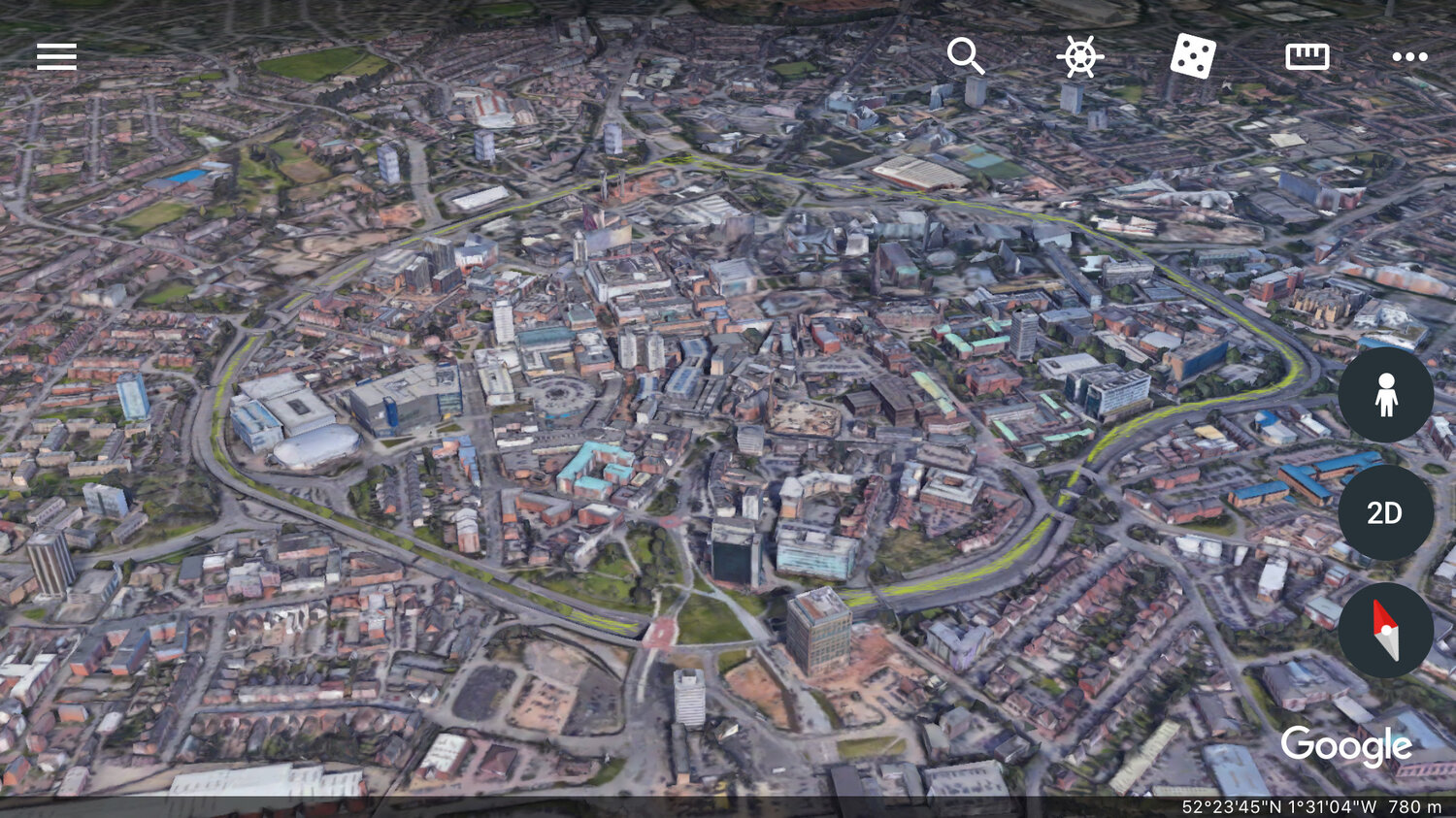 First, it’s true there has been some (comparatively modest) change. The Council’s recent re-design of Junction 6 – finally putting pedestrians first – is excellent, with broad new “greened” access into Warwick Row from Friargate and the train station.

But is this anywhere near enough? The recent push by central government for a city-centre congestion charge to combat pollution is, I think, a major wake-up call for Coventry.

Nothing is decided yet – the Government are considering a counter-proposal, however, minor tinkering (while they wait for mass adoption of electric cars) seems the Council strategy.

Is this ‘wishing away rather than rising to the challenge?’ – I’m not sure. Difficult choices, uncomfortable compromises. But while we’re at it, isn’t there a bigger (blue sky?) opportunity for Coventrians – a ‘place-making’ alternative that aces those pollution targets and also showcases our spirit of re-invention?

Imagine then.. for instance, the anti clockwise circuit of our ring road as an elevated, circular, permanent green space. A 2.25-mile-long public arboretum park, with integrated cycle paths linking neighbourhoods (the visuals, below, show how such an intervention might look, utilising the entire inner dual carriageway). Thousands of shallow rooted specialist trees – funded through the governments national tree planting initiative – with shrubs, flowers – a 36,000m2 “green-lung” that re-balances pedestrian and car.

This would be innovative place-making, on a scale to put Coventry firmly on the world stage – and demonstrate that the city is prepared to respond to the climate emergency with verve and confidence (as well as with an eye to its own heritage and history!). 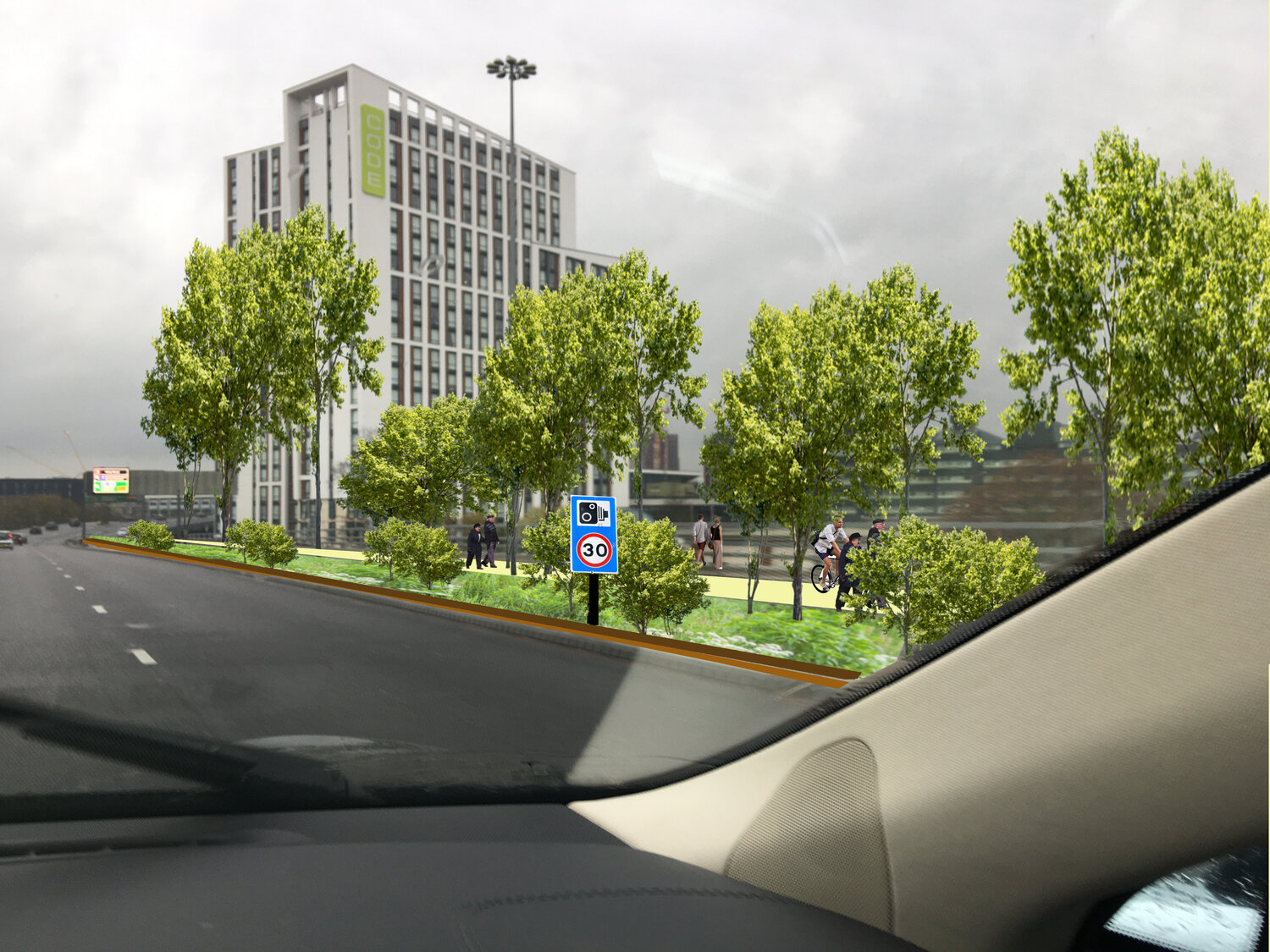 Fanciful? I don’t believe so. A new plan with this idea at its heart would almost certainly remove central government’s threat of imposing charges for motorists accessing the city – charges that would be bad for our growth, with little tangible upside (we wouldn’t even get the cash back to spend locally). 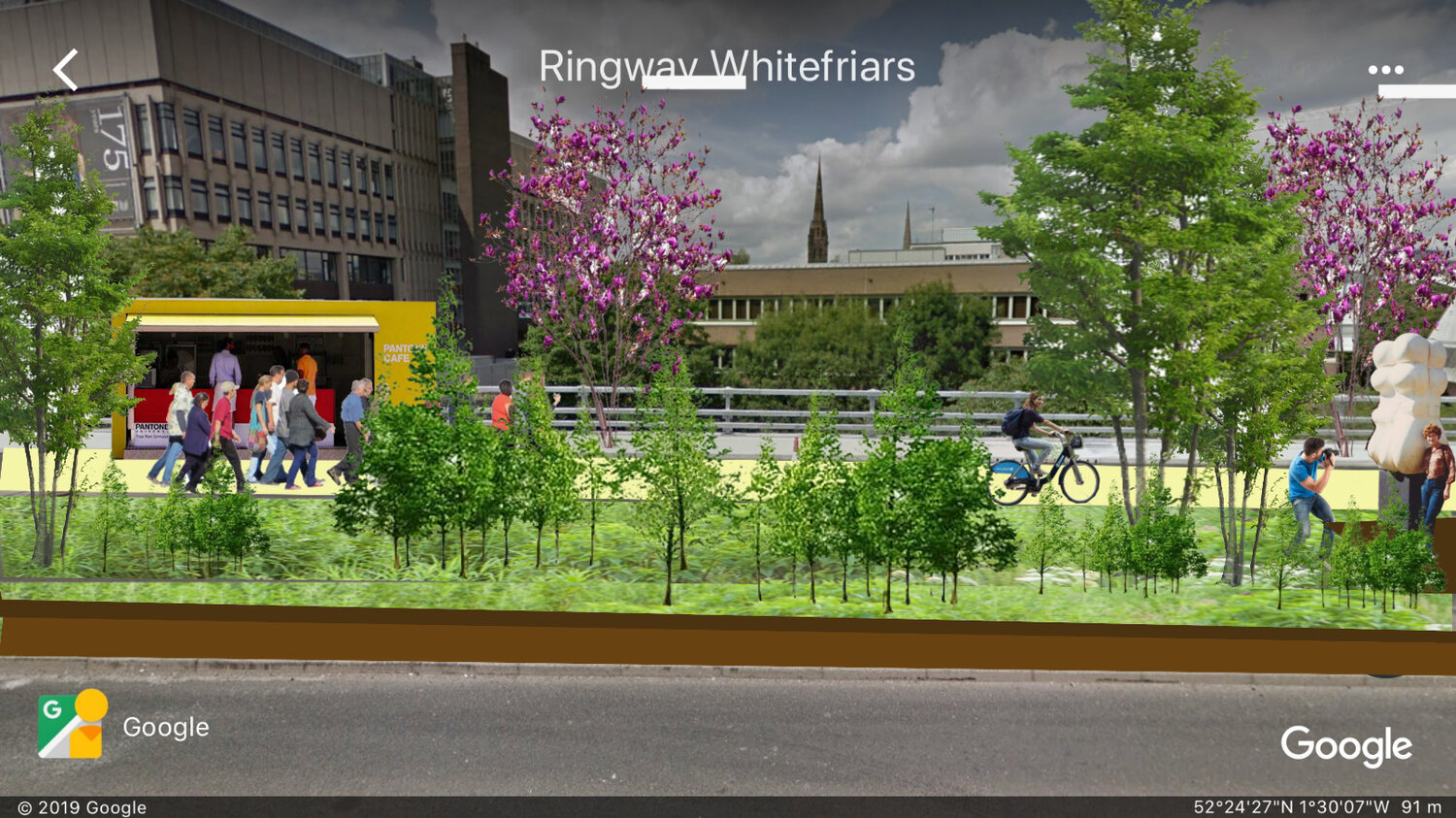 How a Coventry ringroad of the future could look – with the anticlockwise carriageway given over to a 2.25 mile Aboretum Park & cycle-way.. kicking the government’s argument for a congestion charge firmly into the long grass.

In addition, a vision such as this could dramatically reframe visitor perceptions – as has been the case with the “High Line” in New York City. Since 2009, this 1.45-mile stretch of elevated subway has been in use as a community park, becoming an unexpected yet phenomenal success. Since opening, it has fired the public imagination, attracted 12.5 million visitors and helped spark the regeneration of an entire (previously run-down) neigbourhood. 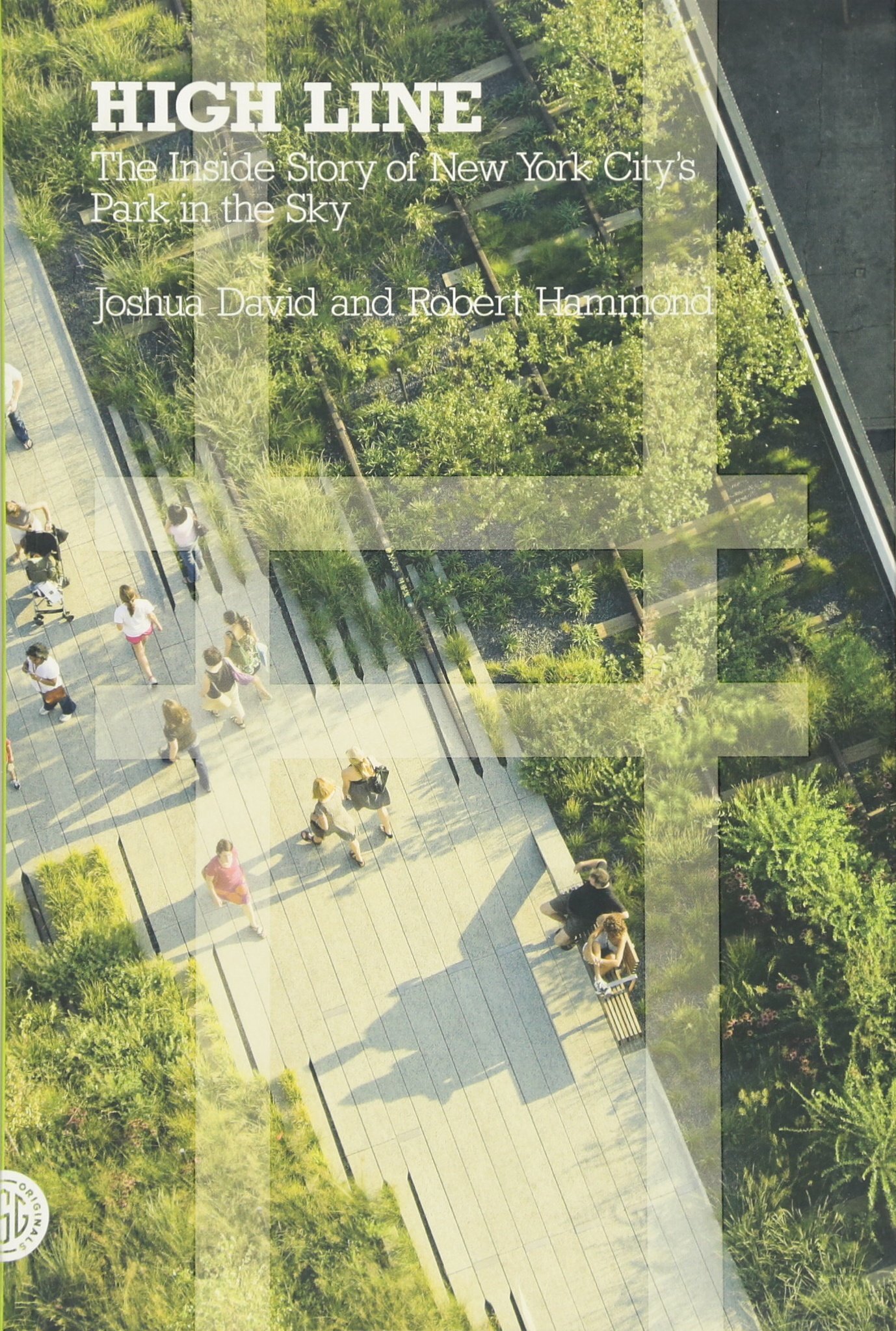 Consider again Coventry’s ring road circuit and you’ll see we already have many of the ingredients to make this work without unduly restricting traffic flows. 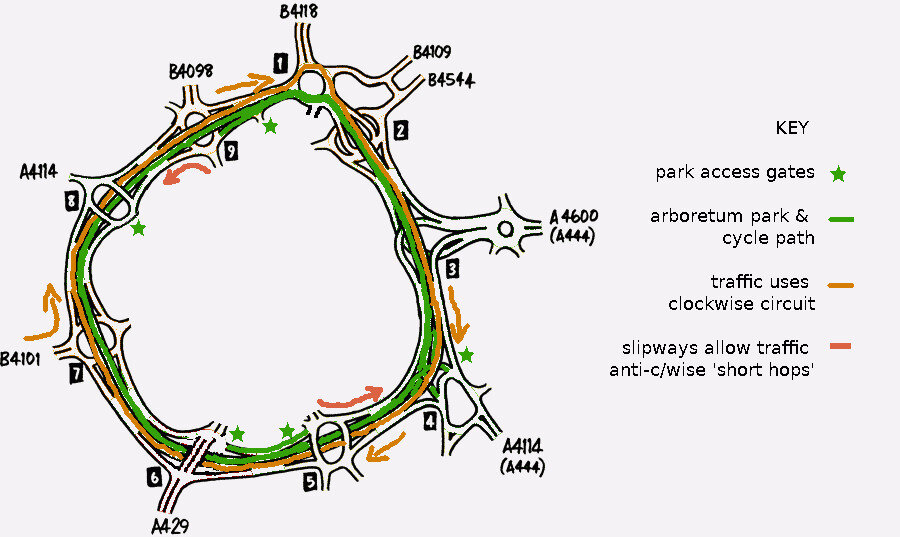 The sketch shows how the main clockwise carriageway circuit could operate independently as a one-way system, with the network of junctions and interconnected slipways allowing access to/from the city for buses and car parking (incidentally, the ringroad was set up like this ie. traffic allowed clockwise only, in 2017 for the ‘sky ride’ family cycle event – and worked fine – it’s where my idea came from!).

Crucially though, this all needs joined-up thinking. There would need to be new linking with an “outer ring road” – an infrastructure plan (as Birmingham has done), with the key objective of removing through-traffic from the centre. Bear in mind the majority of cars using our ring road today are transiting, rather than visiting the centre for retail, leisure or jobs.

On the face of it, Coventry’s ring road is the counterpart to Birmingham’s reviled Inner Ring Road – a historic planning blunder. It was certainly hugely destructive – requiring the clearance of almost 700 buildings, including many historic treasures and a huge swathe of real estate with great potential. 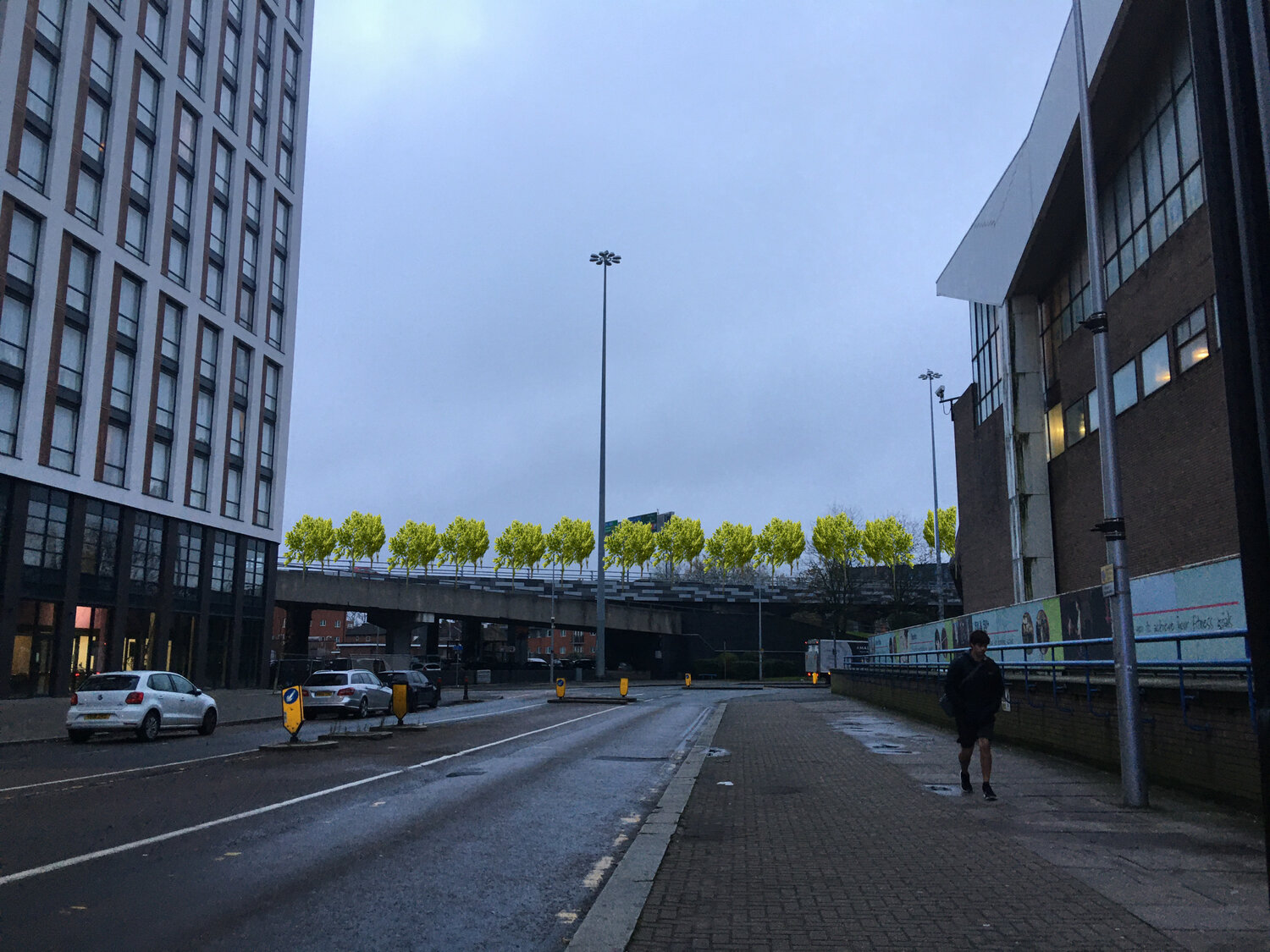 But here’s the rub – Coventry’s ring road is also one of the city’s architectural glories. Far from “just a road”, the soaring, swooping ring road is actually a proudly distinctive part of our city. Iconic, trailblazing, emblematic – it’s steeped in social history, a symbol of Coventry’s pioneering “motor city” story, and arguably – as much a part of Coventry’s DNA as Godiva or the Blitz. 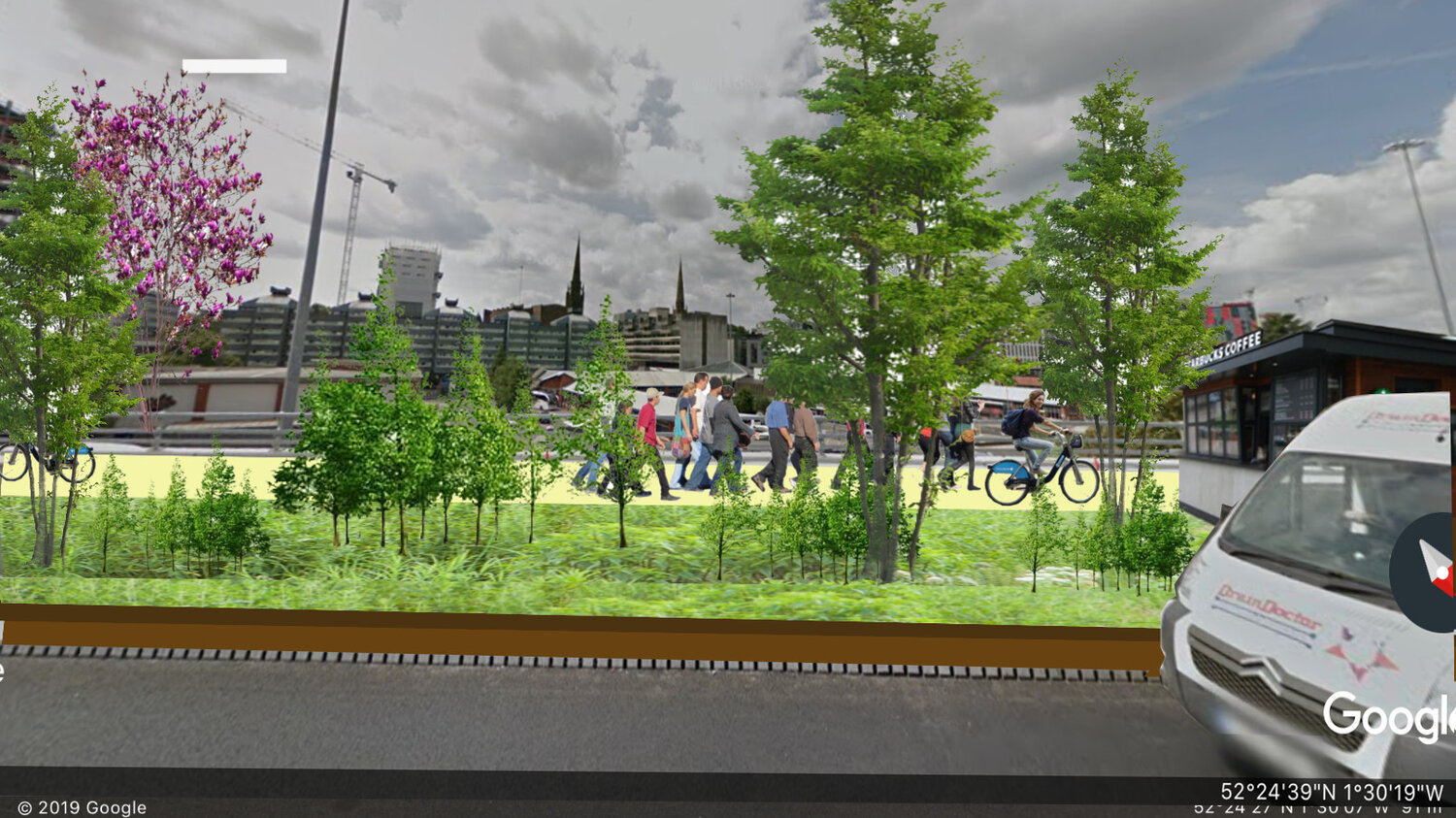 So maybe (unlike Birmingham!) we should keep our ring road – but just re-invent it, with trees, people and cycles.. like New York did with their High Line. 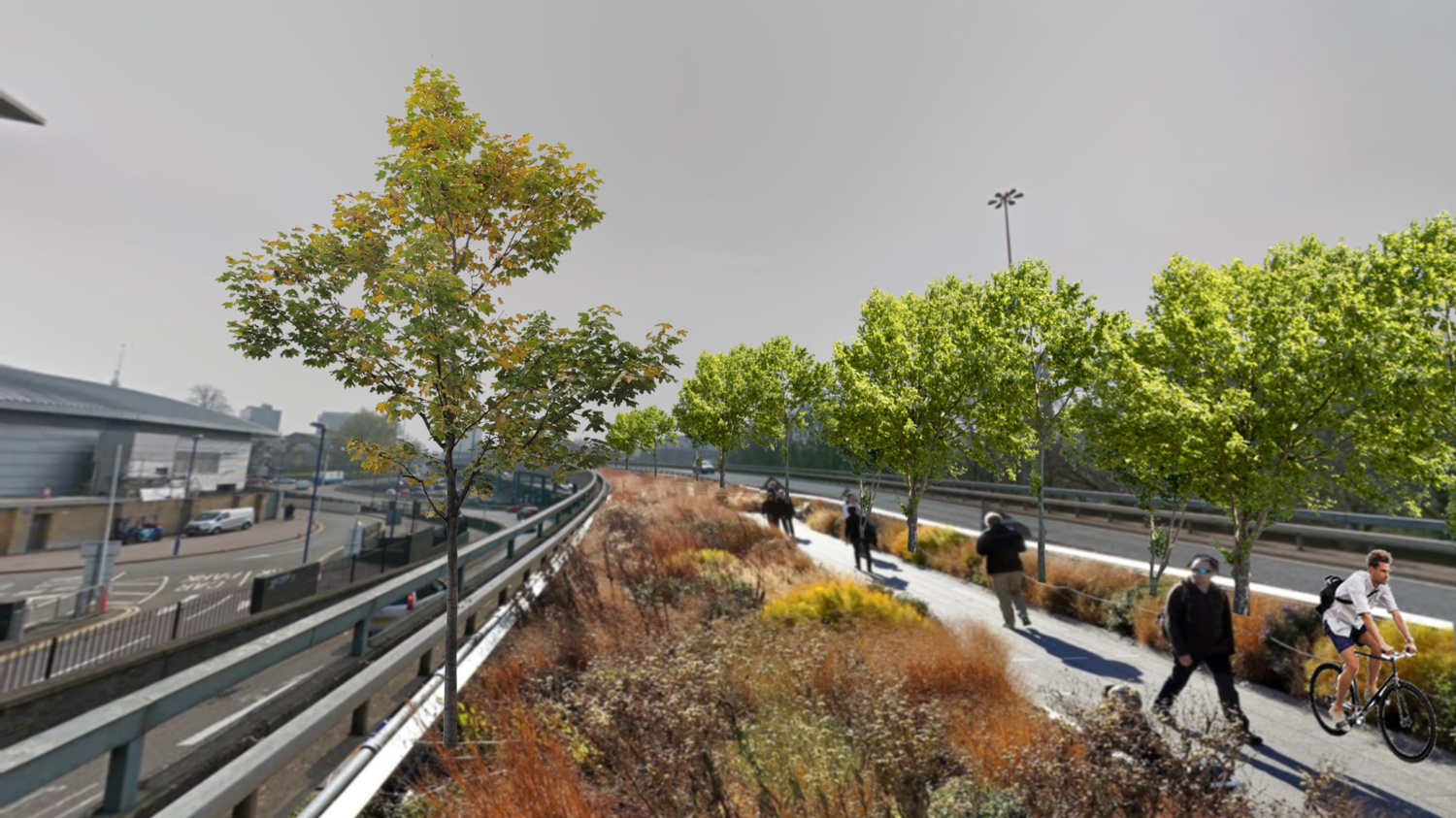 and.. Coventry’s Arboretum Park – in the sky!